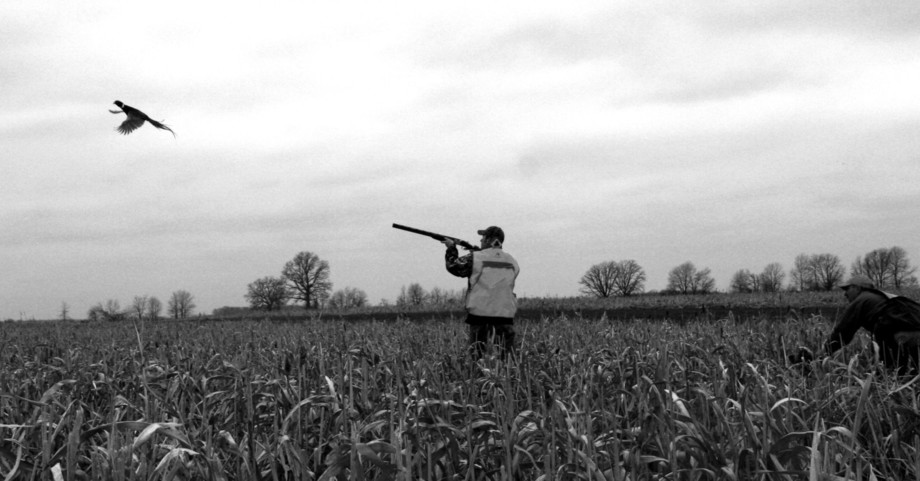 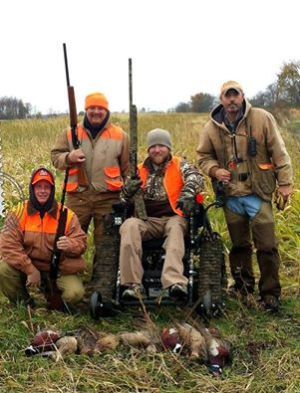 Operation Cherrybend is an annual event made possible by donations from our community and those that support our mission. This event combines the resources of Cherrybend with the talent of Nashville singers and songwriters as a week long event spent with our wounded hero's pheasant hunting, shooting, night coyote hunting, and enjoying fellowship, good music and brotherhood.

Today, Operation Cherrybend is a 501(c)3 non-profit. All organizers for the event are unpaid volunteers that are dedicating their time and resources to make this event happen for our Veterans.

The event brings combat and combat wounded veterans to Cherrybend for the opportunity to meet others just like them as well as share good times and fellowship doing adventures on the Farm. To add to the magic is the singer's sharing stories and songs to bring it all together. Almost all of the singer songwriter's are veterans themselves!

Operation Cherrybend has grown into a major regional event! The OpCbend Team now has over 10 volunteers that help make this event happen. This year we had 30 veterans staying on-site for the weeklong retreat.

Thank you to the local community for rallying around this event to help make it so very special!!! 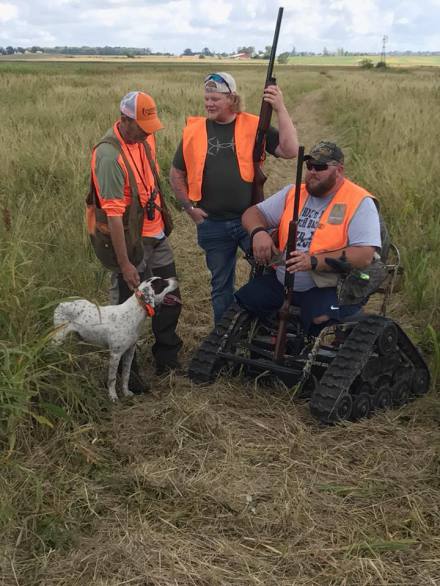 The song featured in the music video below was written by a Nashville songwriter, Rick Tiger,  that visited and participated in Operation Cherrybend '17. He was inspired by the community outreach to our veterans and by the amazing healing that happens when helping hands come together. The song was recoreded and video produced by Jared Ashley, Navy Veteran and Musician. Please take the time to watch the video. Find a veteran organization that you feel is inspiring and support their efforts. 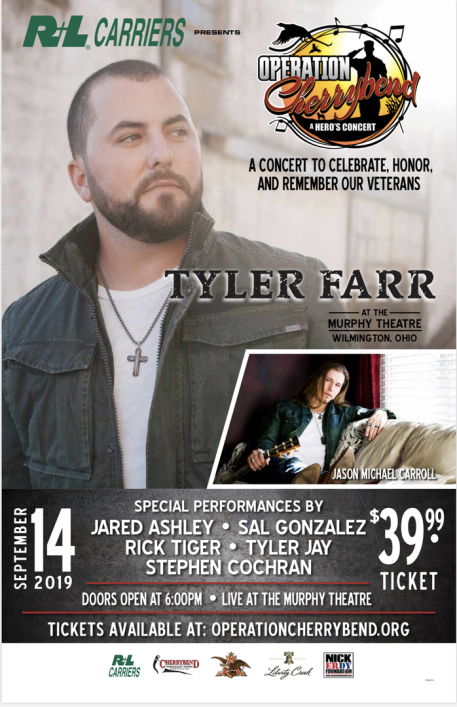 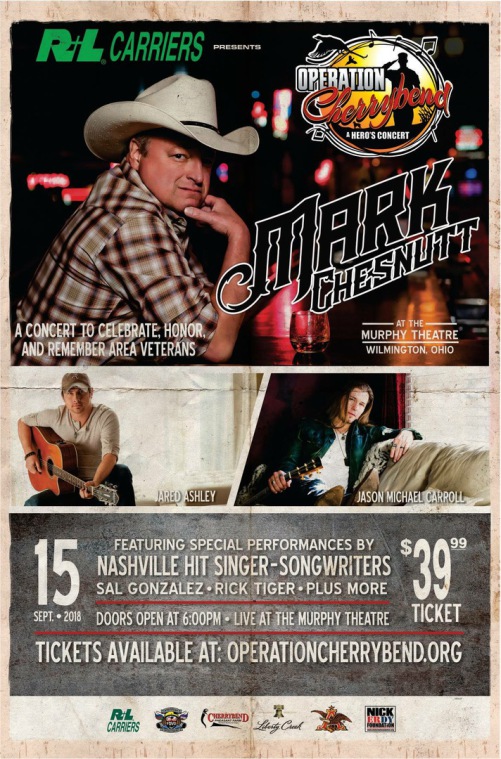 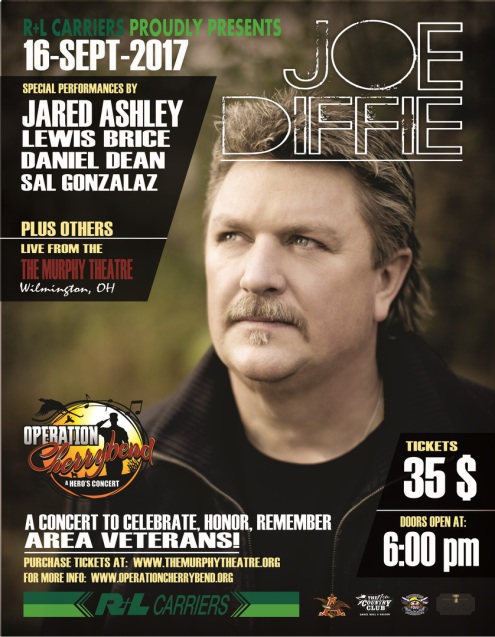 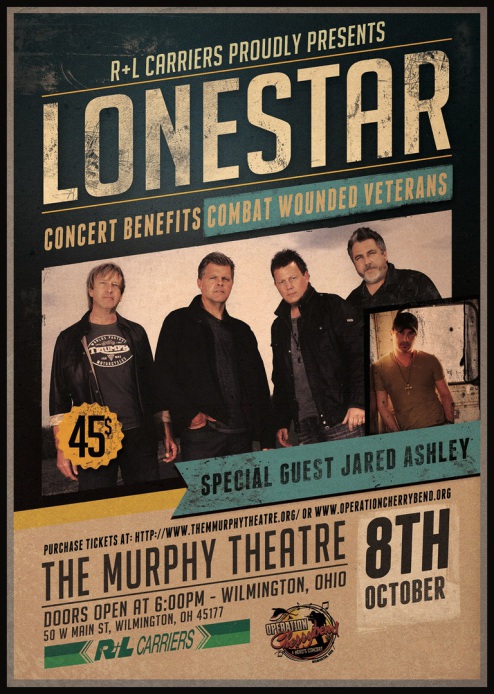 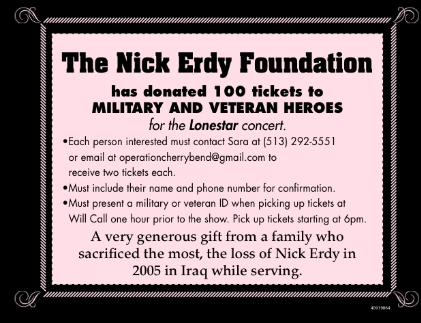 The Nick Erdy Foundation has donated 100 tickets for every concert beginning with the Lonestar Concert on 10/08/16 and every year since! What a generous gift from a family that has given the ultimate sacrifice. 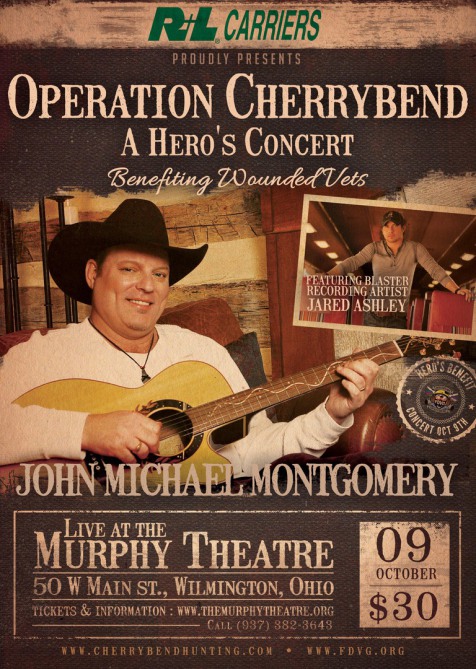 The October 2015 event produced a concert at the local Murphy Theatre sponsored by R&L Carriers, that featured opening acts with the Songwriter's in the Round with Mark Ramsey, Ray Stephenson, Buddy Owens and Daniel Dean. That was followed by the opening act Jared Ashley and his band which energized the crowd with his his hit songs including "Last Train to Memphis". The crowd got on their feet with the feature of Mark Ramsey singing "Hang on Sloopy" and the crowd answering O-H-I-O. The headliner was John Michael Montgomery who played many of his number one hit songs including "I Swear" and "I Love the Way You Love Me" which had couples in the crowd coming forward to dance in front of the stage. It was a special evening with moments honoring our Veteran's for their service and promising that we still care.

Please leave a voice mail after-hours.If interested in a next day hunt we absolutely will get back to you!

For Email Marketing you can trust

Please add your email address in the box above to be added to our EMAIL list.